The key reports scheduled for this week are the February employment report, December New Home Sales, and January Housing Starts (Some more catching up).

Other key reports scheduled for this week are the trade deficit and February vehicle sales. 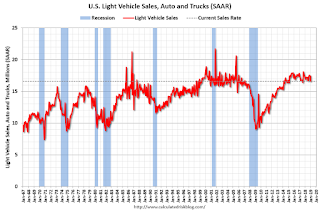 This graph shows light vehicle sales since the BEA started keeping data in 1967. The dashed line is the January sales rate.

10:00 AM: Construction Spending for December. The consensus is for a 0.6% increase in construction spending. 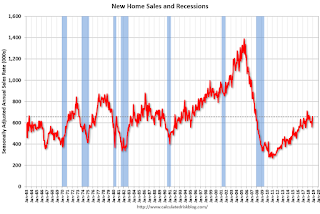 10:00 AM: New Home Sales for December from the Census Bureau.

This graph shows New Home Sales since 1963. The dashed line is the sales rate for last month.

The consensus is for 591 thousand SAAR, down from 657 thousand in November.

10:00 AM: the ISM non-Manufacturing Index for February.

----- Wednesday, Mar 6th -----
7:00 AM ET: The Mortgage Bankers Association (MBA) will release the results for the mortgage purchase applications index.

8:15 AM: The ADP Employment Report for February. This report is for private payrolls only (no government). The consensus is for 180,000 payroll jobs added in February, down from 213,000 added in January. 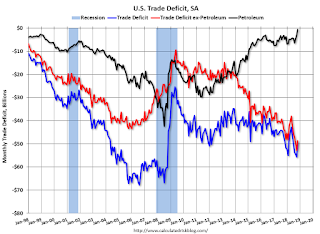 8:30 AM: Trade Balance report for December from the Census Bureau.

----- Thursday, Mar 7th -----
8:30 AM: The initial weekly unemployment claims report will be released. The consensus is for 225 thousand initial claims, unchanged from 225 thousand the previous week.

12:00 PM: Q4 Flow of Funds Accounts of the United States from the Federal Reserve. 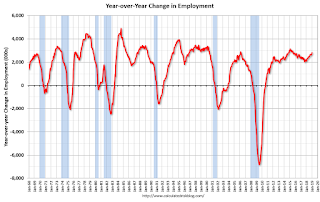 This graph shows the year-over-year change in total non-farm employment since 1968.

In January the year-over-year change was 2.807 million jobs. 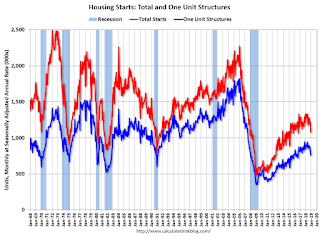 This graph shows single and total housing starts since 1968.

Want to join the discussion?
Feel free to contribute!